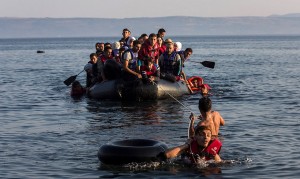 Photojournalism now is focusing on the thousands of Syrians, Afghans, Pakistanis, & Palestinians coming through Greece on their way to northern European countries. The stories are wrenching even though Greece has temporarily opened its borders. With the Troika firmly in control in Greece, that policy is likely to change back to conform with the barbarism of European Union (EU) policy.

What’s troubling is the complete lack of reports on refugees from Libya to Italy. That is the route where most of the drownings were happening & where the EU has now launched a naval assault on “human traffickers.” Right-wing publications have even fabricated an ISIS scare with headlines like “ISIS in Libya: overrun Europe with immigrants & ‘turn it into hell’.”

A few months ago, there were an estimated 500,000 African refugees in Libya waiting to cross to Italy. There were reports of naval ships from different European countries already in the Mediterranean along with helicopters & aerial surveillance. So what’s going on? Where are the refugees? Have they ceased crossing? Did they turn around & go back home? Has the EU shut down operations so they can no longer cross? Hasn’t a single news service tried to find out what’s going on?

This photo is Syrian & Afghan refugees landing at Lesbos.