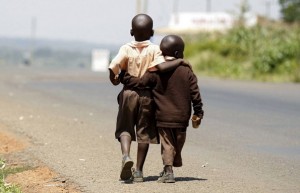 It was distressing to see the repressive Kenyan regime gussying up kids & draping them in American flags for Obama’s recent visit. It’s an attempt to persuade the young that the US has only benign intent in Africa, rather than economic & military control that will make life unbearable for working people.

Such persuasion apparently doesn’t work very well since university students have had many confrontations with riot police on their campuses–on occasions, protesters were chased into classrooms & bombarded with tear gas.

Where there is resistance to repression, there is hope. Where there is such humanity as these small boys (walking home from school in Kogelo) there is not only hope but necessity for the success of those who stand against tyranny.

Activists around the world need to join forces in solidarity with Kenyan activists demanding “US hands off Africa!”