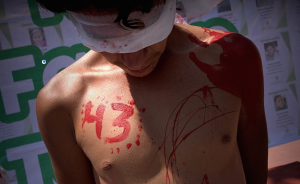 This young man in Guadalajara, Mexico is protesting the disappearance of the 43 students from Ayotzinapa teachers college last September. The Mexican government, which sicced their military on the students, has declared the case closed. The families are refusing that verdict & believe their kids are being held in secret prisons. It’s one of the most important political battles in Mexico since in the past several years, over 30,000 people have been disappeared.

What’s remarkable about the protesters in Guadalajara is their defiance since Mexico is essentially occupied by its own military & bold, public political resistance like this is punishable–by disappearance.

Our deepest respect & solidarity with these activists.