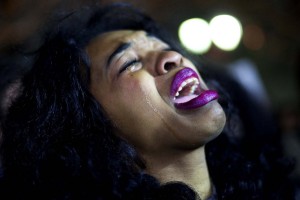 This woman is grieving & protesting the Garner decision in Philadelphia at the city’s tree lighting ceremony last night. It’s a very poignant photo because grief & outrage have always been inextricably intertwined. They are the twin emotions of social protest & the driving force of social transformation.

Too often activists are smeared as troublemakers, malcontents, anti-social misfits. But it was Che Guevara who said “At the risk of sounding ridiculous, the true revolutionary is guided by great feelings of love.” One might only add to love the emotions of grief & anger & an implacable sense of justice.

Those of us living to witness the regeneration of Black power can thank the lucky stars we were born under. This is a tragic day because justice was again denied. But this is a glorious moment in time when thousands of human beings rose up & said “We can’t breathe. Racism has to be dismantled.” It’s gonna be a bumpy ride because the ruling elite has everything invested in racism; for them much is at stake & they will use every weapon in their arsenal, including dirty tricks & frame-ups, to destroy this new movement. We keep our eyes on the prize & keep moving forward in solidarity with the Black community.