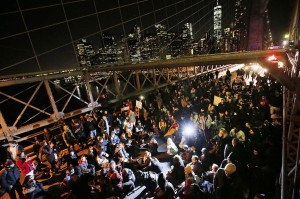 Thousands of protesters were all over NYC & across the country last night to protest the refusal to indict the killer cop who murdered Eric Garner in July. Thousands closed down traffic into & out of Manhattan by taking over the bridges. Protesters took over Grand Central Station & closed down intersections. Garner’s last words “I can’t breathe” reverberated across the city.

The US war on the Black community was always intended to reverse the gains made in the Civil Rights Movement of the 1960s & to forestall the development of a new generation of activists to complete the unfinished tasks. This has been a brutal & relentless government campaign since the ebb of the social movement now over 40 years ago.

The Democratic Party plays a vital role in channeling the energies of resistance. The periodic choice between white & Black Democratic candidates was supposed to serve in place of activism. We can see just how far that went with hundreds of unarmed kids shot down on the streets every year & thousands railroaded into jail for minor offenses & nary a peep from those ersatz champions in the Democratic Party. Champions like Democrats Robert McCulloch, the Ferguson DA; the governor of Missouri who deployed National Guard against protesters; & Obama, who offers little more than mealy-mouthed condolences but will deliver no justice.

The ruling elite is playing a dangerous game here. One could say they’re pushing their luck hoping police repression of protesters, continuing violence against Black teens in the streets, & kangaroo court verdicts will demoralize the movement now emerging across this country. They think they can wait it out & outsmart it like they did the Egyptian & other Arab uprisings, like they’re doing against austerity protests in Europe & elsewhere. They seriously underestimate the fathoms of Black outrage at decades of SWAT teams & racist tyranny.

We are witnesses to & participants in the rise of a new social movement that will begin to tear the fabric of systemic racism asunder, that has the potential to transform social & political life not just in the US but across this planet. The ruling elite will use the courts & the cops to reverse that powerful surge of resistance. It is our mission to drive it forward under the mantra “We can’t breathe in a society based on racism & social hatred. It’s gotta go!”