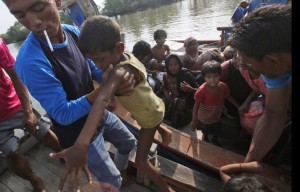 There are so few stories coming out of the immigration crises in the Andaman & Mediterranean Seas that aren’t tragic because it is the suffering of so many confronting the barbaric indifference of governments. Whoever called the poor “the wretched of the earth” hadn’t yet met neoliberal politicians willing to let thousands drown & starve to death without lifting a finger. Actually such crimes were always a part of colonial history but now they stand exposed & humanity (individually & collectively) must choose where we stand: with human solidarity or with barbarism.

Lampedusa (which has an immigrant detention center & is a transit point to Europe), is a tiny island under 8 square miles (20.2 square kilometers) with a population of 4,500 people engaged primarily in fishing & farming with tourism a thriving business. After the Arab uprisings & US-NATO war against Libya, the island was deluged with upwards of 60,000 refugees, mainly from Tunisia & Libya. Those most concerned about refugees were small shopkeepers afraid refugees would deter tourism & who attempted to prevent immigrant boats from landing. The coast guard had to create a landing area behind a phalanx of armed police.

Most immigrants lived in the streets & there were riots because the 850 bed detention facility was an overcrowded hellhole. The mayor then (2011), Bernardino de Rubeis, was inflammatory & led the campaign against immigrants for ruining the island. What does it say that in 2013 our man De Rubeis was jailed for over five years & disqualified from public office for life for extortion & accepting bribes in exchange for illegal dumping of waste? If you want to hurt the tourist industry, there’s nothing like mountains of stinking garbage.

All that has changed under the present woman mayor of Lampedusa named Giusy Nicolini, an outspoken advocate for immigrants. In 2013, off the coast of Lampedusa local fishermen rescued people from a capsized immigrant boat. The residents of Lampedusa, led by Nicolini, compassionately welcomed the survivors & continue to provide shelter in churches, blankets, & food. Nicolini publicly criticized the Italian coast guard for botching the rescue & continues to speak out against EU immigration policy.

In the Andaman Sea, Thai, Malaysian, & Indonesian navies prevented immigrant boats from landing & pushed them further out to sea–adrift without food, water, or engines, many in need of emergency medical care. The headlines today read that after Indonesia agreed to temporary sanctuary, Indonesian fisherman rescued & towed the boats to shore. One fisherman who led the rescue was Razali Puteh who after spotting a drifting boat of refugees rallied other fishing boats to help bring immigrants to shore. When the refugees landed photos show Acehnese residents carrying those who are sick to shore. That was while Indonesia’s foreign minister was saying the country had “given more than it should” to help Rohingya & Bangladeshi refugees.

There’s no reason to draw cynical conclusions about the human race from these immigration crises. But there is every reason to question the character of political leadership. What seems an insurmountable crisis to the politicians was managed quite simply by working people. This might suggest that the people running this world are the wrong class of people, that they are truly the wretched of the earth. And the human race deserves far better.

The photo is an Acehnese fisherman rescuing refugees at sea. Our deepest respect.