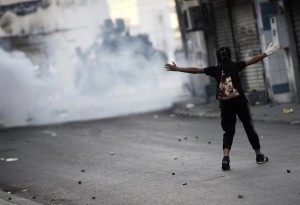 This young guy is part of massive protests (now in their 6th day) in Manama, Bahrain against the arrest of Sheikh Ali Salman, a leading democracy activist. Neoliberal capitalism hasn’t a lot of options for managing the global crises of their volatile system. Austerity programs aren’t working & are creating widespread resistance. That’s where repression comes in. The endless proliferation of “think tanks” haven’t been sitting around doing nothing. They’ve been devising contingency plans to deal with social unrest & resistance to impoverishment of the many to lard the asses of the few. All that thinking & all they can come up with is militarizing the police, equipping them with flak jackets, tear gas, stun grenades, & armored vehicles. Any thug could come up with that.

In the past few years, several countries have implemented repressive internal security programs: Australia, Bahrain, China, Turkey, Pakistan, Mexico, the US, Spain, Kenya, Uganda, Russia, Israel, Haiti, Egypt, the Philippines (& many others). It isn’t from a confluence of the stars that regimes develop similar programs. They collaborate with each other, share malignancies, even conspire to maintain some semblance of stability & coherence for their system. You’ll find the same correspondences in immigration policies or divide & conquer strategies, especially around the use of racism.

SWAT team policing is now accepted as the norm internationally & that’s what makes todays protesters under repressive regimes like Haiti or Egypt or Bahrain so remarkable. They know they might get beaten, possibly arrested, & certainly tear gassed & still they stand their ground, including this guy against a moving tank. We saw the same thing in the Black community in Ferguson.

The only defense against all that is international collaboration & solidarity of our own & massive numbers. There has been discussion lately among new activists expressing anxiety over the possibility of being attacked by police. It’s an absolutely valid concern. But the political movement in many countries is well developed & experienced at coordinating peaceful protests & non-violent self-defense. Of course you could be an ace at all that in Chicago & it would serve you no good purpose in Port-au-Prince or Manama or Cairo–or Ferguson. For that, international solidarity is the sine qua non. And it might be added, a solidarity that is long over-due & grows more urgent as neoliberalism tries to reduce more & more working people to the equivalence of feudal serfs.

Our deepest admiration for this young man in Bahrain & for the Kenyans beaten last week at protests against new security laws, for the Haitians brutalized recently for demanding free elections, & for the thousands of other protesters around the world who stand so steadfast against tyranny.