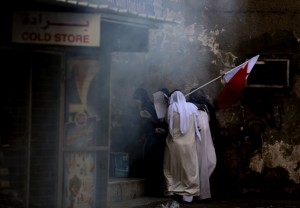 The Arab uprisings which erupted now four years ago were remarkable for the prominent role of women. (Women have always played central roles in social upheavals but when the history got written they were left out. The internet ended the reign of that kind of “history” & misogynist glory-mongering.) After a decade of justifying the US-NATO war in Afghanistan with baloney about liberating women, women revolutionists by the thousands across the Middle East showed the world what resistance to tyranny looks like. Thousands of them were veiled head to toe.

Reportedly, wearing a full veil (niqab) is not required in Bahrain but during protests almost all women wear them so as not to be identified by the cops & as protection against tear gas. Marches conform to religious tradition by marching in different groups when men & women protest at the same time but there are also women-only marches. The women have made it quite clear they are not mere auxiliaries to the democracy movement but among its leaders. Photojournalist documentation makes that irrefutable.

The UK has been involved in Bahraini military & intelligence training for decades. Along with Yates, a team from Scotland Yard trained & directed the police force & trained Saudi national guards deployed in force against protestors in Bahrain in 2012. The UK has a long history of orchestrating police violence in Bahrain–from 1966 to 1998, Ian Henderson, a former British colonial officer led Bahrain’s secret police, gaining the sobriquet, “Butcher of Bahrain” because of the extreme kinds of torture used against thousands of dissidents, including children. Repeated calls for the UK to prosecute Henderson under international law have been ignored because of Britain’s close ties with the Bahraini dictatorship.

Both the US & UK have economic, political, military, & strategic interests in Bahrain which conflict with the democratic needs of the Bahraini people. That’s why the US & UK continue to stand by the murderous regime with armaments, combat vehicles & helicopters, communications equipment, & a missile system. Both countries play a training role in the use of death squads. And of course without doubt, the CIA is there training torturers. The US & UK claim the weaponry is for Bahrain’s external defense but Bahrain is not a country under military siege by outside armies; it is a regime conducting an all-out war against it’s own people.

It’s already been a few years since media began writing triumphal obituaries about the end of the “Arab Spring.” But if the Bahrain, US, & UK regimes were confident of the stable restoration of tyranny they wouldn’t need to turn Bahrain into a gulag & the regime into an armed encampment against the people of Bahrain.

Protests erupted in the past several days after police re-arrested Sheikh Ali Salman, a leading democracy figure who heads Bahrain’s largest opposition group which was inspired by the 1979 revolution against the Shah of Iran. He was charged with trying to change the regime by force. The charge is baseless since he is a known opponent of guerrilla or military methods of resistance.

The full range of Salman’s political ideas are not elaborated in media but Salman wasn’t picked up because he poses any military threat to the regime. Let’s get real! One reason may be because because he’s been cautioning for a very long time against the regime’s use of divide & conquer.

It’s been very clear from its inception that this is a democracy movement but the al-Khalifa regime (certainly under advisement of the US & UK) have relentlessly pursued a divide & conquer strategy of demonizing Shiites as extremists & pitting them against Sunni. Factional conflicts that have emerged are orchestrated from the Pentagon, not rooted in theological disputation. This strategy has proven effective & massively destructive (in Iraq, Pakistan, & elsewhere) of united opposition to tyranny & to US interference. It goes without saying that corporate media echoes that line in reports on Bahrain in an attempt to make the conflict seem irrational & over theology rather than political & class divisions.

The women in this photo are in Manama, the capital city, demanding the release of Salman. Here they are taking shelter from excessive tear gas. Our fullest solidarity, deepest respect, & honor to these mothers & teachers of revolution.