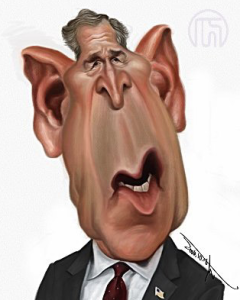 Yesterday, George Bush gave a speech at a NYC event sponsored by his own foundation. It must have been written for him because if there’s any president just as stupid as Trump, it was Bush. There are catalogs & huge compendiums of his quotes published only for their comedic value which include not just slips of the tongue but show his significant cognitive problems. From: “They misunderestimated me” & “fool me once…shame on you. Fool me, you can’t get fooled again” to “I know the human being & the fish can coexist peacefully” & “More & more of our imports come from overseas.”

What wasn’t the least bit funny about Bush were his policies: the No Child Left Behind program which was like a weapon of mass destruction lobbed at public education; the US-NATO war on terror which has made the entire world unsafe for billions of people & increased terrorist attacks around the world; the US-NATO wars against Iraq & Afghanistan which involve unspeakable crimes against those peoples & which have not yet ended; his refusal for over a week to launch aid & rescue operations for hundreds of thousands of mostly Black New Orleans residents stranded in flood waters without food or water due to Hurricane Katrina.

Bush stands a chance of raking in more honoraria if he stops talking like a buffoon & tries to act more like an éminence grise so he had a professional liar write his speech for him yesterday. He used words & concepts way over his head like “nationalism distorted into nativism” & “isolationist sentiments.” He spoke of the “galvanizing moral clarity of the Cold War” by which he must have meant the McCarthy witch-hunt. But the comment that has social media afire is his statement that “bigotry & white supremacy, in any form, is blasphemy against the American creed.” That’s where the lying comes in. Bigotry & white supremacy are as American as Apple pie. They are the very foundations of US history, foreign & domestic policy, & not just American, but world capitalism. World capitalism would collapse without them structured into its entire economic, social, & political edifice.

Things won’t be right with this world until he is prosecuted, even posthumously, for his crimes against humanity.