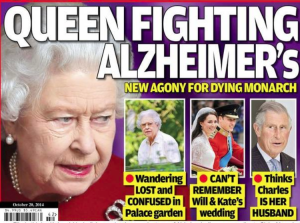 Every time I post about Betty Windsor, I get the naughty finger shoved in my face by some killjoy or socialist who thinks I’m being frivolous again. But since so many socialists have “gone south” & are grieving the death of that mass killer in Syria today, it’s safe to repost this one from 2014. It’s such bad form, but I sometimes laugh at my own sarcasms.

It’s such a shame you have to go to the supermarket to get the important news. If it wasn’t for tabloids at the checkout line we would know nothing about the misfortunes of Betty Windsor. And the poor beleaguered woman has a full plate of them. That damn Camilla is nothing but a trouble maker in the palace. She’s so afraid Betty won’t die in time for Chuckles to become king & her queen that she schemes constantly against poor KKKKaty, even hiding the one biscuit KKKKaty is allowed to eat per day. Now she’s turned her venom on our own Betty & is circulating scurrilous rumors that Betty has Alzheimer’s.

This is particularly malignant since Cammy & Betty seem inseparable & spend all their time together at the horse track. Many tabloids want to know, “How could Cammy do this to Betty when they give each other tips on the horses?” But Globe magazine reports there’s truth & not just libel to the claims. Betty has been found wandering lost & confused in the palace garden. Just last week she was found wandering in a field of ceramic poppies outside the Tower of London & she thought they were real. She spotted Phil across the field & thought he was the rear end of her favorite horse.

Worst of all she has mistaken her son Chuckles for her husband Phil. What’s the downside to that? She always did call Phil her “anus horribilis” & we concur. She also doesn’t remember Willy & KKKKaty’s wedding. There might be something to be said for Alzheimer’s.

In the few lucid moments Betty has left she speaks of exiling Cammy to a deserted island & begs Chuckles to divorce her. But then she reconsiders since who could she trust for racing tips other than Cammy & their bookie?

(Photo is front cover of Globe magazine, an indispensable source of news)