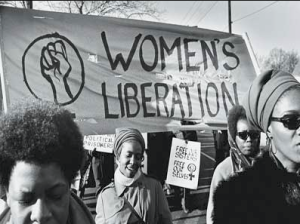 In a theoretical non sequitur that exposes their politics, many are using the Weinstein exposé to go after identity politics. What connection in their minds leads them from revelations about systemic sexual crimes against women to denouncing identity politics? That women are standing together to fight against the assault & rape of women & children? It would be interesting to do a demographics on those most opposed to identity politics. Pardon the speculation, but it’s likely most are white males or in organizations dominated by them. In US politics, women’s power, Black power, Latino power must scare the bejeezus out of them because they undermine the very foundations of white & male supremacy.

Then you get the socialists who try to counterpose identity politics to class politics. Those who call themselves Marxists should try to get a grip on dialectics, on complexities & contradictions. They should put aside mechanical conceptions about society, schematic notions of how things interact & stop talking naive notions about unity of the working class. It might be hard to swallow, but racist & misogynist workers are not our brothers. Ask any woman or Black worker who’s been threatened, harassed, excluded, persecuted by white or male coworkers. There won’t be any harmony of the working class at our expense, by requiring us to keep our mouthes shut when someone tries to make our lives a living hell. Until we have persuaded or forced them to see us & treat us as human beings, they can stuff that phony harmony stuff because it isn’t harmony; it’s capitulation to oppression.

Capitalism, as a system, may have inherited misogyny from history but it was built on a foundation of colonialism, racism, & white supremacy which included extreme sexual violence against women & children. It now cannot function without the subordination of female, black & brown labor. Sweatshop economics are based on exploited women, child labor, & racism. So you can blither till the cows home about how identity politics weakens working class unity against capitalism, but it only means you think in schemas & don’t get complexity. If you’re gonna call yourself a Marxist, get it together on the dialectic. Meanwhile, those who care about human rights will keep trying to build movements of the oppressed to persuade white & male workers to stop preventing unity by acting all high & mighty over us.

One last thing: US & European feminism is not the gold standard theoretically or in political organizing. Feminism is a social movement, not a political party with an agreed-upon program for action. There are contending political perspectives within the movement, from reactionary & racist to international. As a social movement, those differences have to be hammered out–which does not come easy. There are issues, like reproductive rights, that despite class & other differences, we can agree to work on together. But no one, especially white male bloggers, can define who is & is not a feminist based on their prejudices. Feminism is the struggle against the special problems we face under capitalism & in some cases under dictatorship, war, occupation, persecution. The gold standard is not how many feminist bloggers a nation has but how many women are engaged in political organizing. That requires examining women’s work in the Arab Spring uprisings, in the Syrian revolution, in Kashmir, India, Bangladesh, Guatemala, & elsewhere.

Photo is Black women liberation activists from the 1960s to show that despite the misrepresentation of our history, Black & Latina women were an important part of the movement of the 1960s-1970s.