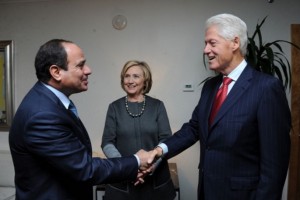 Just after General el-Sisi took over as president of the Egyptian military junta in June 2014, Secretary of State John Kerry expressed US support for his regime & indicated that the executive hold on some US military aid (in place since October 2013) would end. The partial freeze withheld Apache attack helicopters, missiles, tank parts, & fighter jets plus $260 million for the general Egyptian budget. The freeze was grandstanding to placate critics of the violent military crackdown on the Muslim Brotherhood.

The multi-billion dollar US military aid to Egypt is used primarily against its own people & is the Camp David Accord (brokered by then president Jimmy Carter) quid pro quo for abandoning Palestinians to Israeli ethnic cleansing.

In March 2015, a year after Kerry’s assurance, Obama lifted the partial freeze on weapons & in a personal phone call to el-Sisi confirmed that the US would continue the annual $1.3 billion in military assistance to Egypt.

The timing was not accidental. March 2015 was the month when the Saudi-led, US & UK-backed coalition began carpet bombing Yemen. The US was accelerating the sale of weapons to the coalition states, including Egypt which sent fighter jets.

In September 2014, a few months after he took power, el-Sisi met in NYC with former US Secretaries of State & monstrous war criminals Henry Kissinger & Madeleine Albright where they reportedly discussed “current developments in Egypt & the region.” Shortly after that meeting, el-Sisi met with Bill Clinton & former Secretary of State Clinton.

It was reported by Al Jazeera today that according to Amnesty International, about 41,000 people have disappeared in the first two years of el-Sisi’s rule & thousands have been killed during the suppression of protests, strikes & by the death sentence.

Can someone please explain where in all of this is the “hope & change” stuff or the lesser evil politician?

Let it be acknowledged that the people of Egypt, Yemen, & Palestine are suffering because too many people in the US are unable or unwilling to face the truth about their own government & actually believe there is a lesser evil.