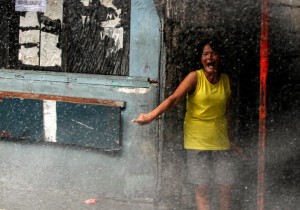 This Filipino woman is watching bulldozers & riot cops move in to demolish the shanty town where 500 families live in Quezon City, a section of metropolitan Manila. There have been several of these slum demolitions, not just in Quezon City, but all over Manila; this is the second this month in Quezon City when another 300 families were evicted.

Residents have always mounted fierce resistance to these forced evictions & at the earlier one in May they pelted the demolition crew & cops with bottles, rocks, & plastic bags with poop & urine. Not at all inappropriate when you’re being driven into homelessness for purposes of gentrification–& when riot cops come armed with water cannons & other assaultive weapons against unarmed residents, including elderly & children.

The battles in Quezon City go back years with appeals by residents to the Commission on Human Rights, to the Manila Development Authority (which authorizes demolition squads), & attempts to get the Quezon city council to declare moratoriums on evictions until there are enough relocation sites–mind you, not provision of public housing for evictees, but empty lots where they can move. Quezon City, identified in 2008 as the richest city in the Philippines, has embarked on a massive infrastructure program including business parks, IT & call centers, high-priced condos, shopping malls, & other projects designed to attract investment. Shanty towns will not be allowed to stand in the way of that.

Most of the residents of urban slums were rural people displaced in predatory land-grabs & by IMF neoliberal agricultural policies. Neoliberalism is a scorched earth policy which includes privatizing public lands in metropolitan Manila & legal maneuvers to legitimize the piracy. Many slums & shanty towns were built on public lands. The government just as often uses bulldozers as it does torching the slums to drive residents out.

The Philippines is a highly militarized society, in concert with the US Pentagon. It receives millions of dollars in US military aid & holds annual joint military exercises with the US. The US & Filipino antiwar movements also have a joint demand: “Money for housing, not for war!”

(Photo by Ritchie B. Tongo/EPA)