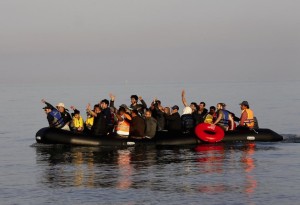 Media has now switched attention from African immigration to Italy & Spain to Afghan & Syrian immigration to Greece. There are lots of photos of overcrowded dinghies crossing the Aegean Sea from Turkey to Greece & landing without incident–almost like it’s a bucolic scene. But we should not for one moment be distracted from military preparations against African immigrants embarking from Libya under the guise of going after “Libyan militias, jihadi groups, & Islamic State affiliates believed to be in cahoots with the trafficking networks” & rumored to have heavy artillery & anti-aircraft batteries.

The British drafted a resolution to get a UN security council mandate which called for the “use of all means to destroy the business model of the traffickers”. The European Union (EU) smothered their war plans in sentimentality saying of the immigrants, “Such vulnerable people cannot be left to resort to the criminal networks of smugglers & traffickers.” In fact, many of them are likely fishermen, not criminal cartels.

Without consulting what there is of a Libyan government on the war plans & despite their opposition, ten EU countries have committed to military action in Libya’s territorial waters led by the Italian government & possibly involving NATO. All 28 EU states are reported to support the proposal. The EU also sent emissaries to China & Russia to muscle or bribe them into agreement at the UN.

The EU didn’t wait for the UN seal of approval but are already deploying warships into the Mediterranean from Germany, Italy, & the UK along with helicopter gunships to “neutralize” identified traffickers’ ships. And what will they do when they identify traffickers’ ships overloaded with immigrants? Torpedo them? Are military operations also planned for inside Libya? Will they just start bombing again where reportedly 500,000 immigrants are encamped waiting to board ships?

These war plans have nothing to do with criminal networks of ‘smugglers, jihadists, or IS affiliates’ & everything to do with terrorizing & deterring African immigrants. If hundreds or thousands of them are killed in the process, that is just less headaches to deal with, as the psycho leaders of the EU see it. It might be time we talk revolution.