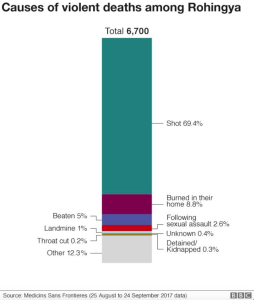 Medecins Sans Frontieres/Doctors Without Borders reports that based on interviews with Rohingya refugees in Bangladesh, at least 6,700 Rohingya died violently just in the first month of the genocide from August 25th to September 24th. This includes at least 730 children below the age of five. Over 59% of the children were shot, 15% were burnt to death in their homes, 7% were beaten to death, & 2% died from land mine blasts.

Dr. Sidney Wong, Medical Director of MSF said, “The numbers of deaths are likely to be an underestimation as we have not surveyed all refugee settlements in Bangladesh & because the surveys don’t account for the families who never made it out of Myanmar. We heard reports of entire families who perished after they were locked inside their homes, while they were set alight.”

The accounting for this genocide has by no means been completed, not just in deaths, injuries, & psychological trauma, but politically before international tribunals where those governments who collude with Burma or remain silent & those political forces who deny the genocide are held to account.