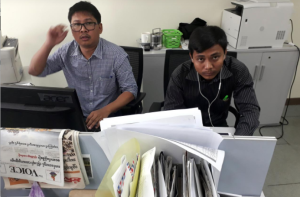 About three weeks ago, Rohingya activists reported the deeply tragic news that over 95-percent of the underground of Rohingya citizen reporters in Arakan state have gone missing since the genocidal assault began on August 25th. Since 2012, they have been sending videos, photos, & reports directly from the killing fields of Burma at great risk to their lives. It appears the murderous junta has finally caught up with them. They are not just a great loss to the Rohingya people but to all of humanity.

Now it is reported that two Reuters journalists stationed in Yangon have been arrested under Burma’s 1923 Official Secrets Act which criminalizes possession & distribution of information deemed classified by the government. The law carries a maximum prison sentence of 14 years. UN Secretary-General Antonio Guterres said the reporters were probably arrested for working on the “massive human tragedy” in Arakan state–by which he means the Rohingya genocide.

It’s noteworthy that the arrest of journalists Wa Lone & Kyaw Soe Oo was announced by Burma’s Ministry of Information in a statement which showed a photo of the two reporters in handcuffs & said they “illegally acquired information with the intention to share it with foreign media.” The Burmese Ministry of Information is a cabinet post in the quasi-civilian government headed by Suu Kyi, not an official appendage of the military junta. This is further documentation, if more were needed, that the so-called civilian government is a party to the genocide & not a powerless bystander wringing hands over the excesses of the fascist military junta which really rules Burma.

The coverage of the Rohingya genocide by Reuters (& by BBC) has been deplorable & deceitful. That is not necessarily the fault of the reporters so much as Reuters’ editorial policy. It isn’t certain what Reuters will do to defend Wa Lone & Kyaw Soe Oo other than issue protests. A few years ago, a Kashmiri Reuters photojournalist returned home to find Indian occupying troops had surrounded & vandalized his home & terrorized his wife & small child. Reuters never reported what action they took in his defense but it was likely back channel diplomacy rather than the international defense campaign required to protect journalists.