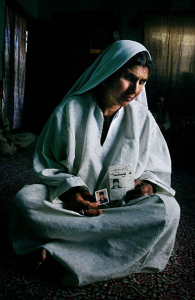 This Kashmiri woman named Misra is holding photos of her son Shabir Ahmed Ghasi who was 21-years-old on January 22, 2000 when Indian occupying forces took him into custody while he was selling fruits. He has never been heard from again. He is one of between 8,000 to 10,000 Kashmiris who have been forcibly disappeared since 1989. That’s about one person every day.

Kashmiri human rights activists, including family members of those disappeared, are playing a central role internationally in organizing against the monstrous use of forced disappearance which is used by up to 50 governments. You can support the parent’s group in Kashmir by liking, sharing, & following this page: https://www.facebook.com/apdpkashmir/