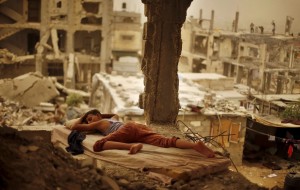 Conditions in Gaza make building the economic & cultural boycott of Israel an imperative. Not to panic, but it is actually an emergency situation. According to a recent report from the UN Conference on Trade & Development, Gaza could become uninhabitable in five years (2020) if the 8-year Israeli blockade is not lifted.

This photo which looks like Armageddon is a young boy sleeping in the shell of his family’s home which the Guardian-UK tells us ‘witnesses claim was destroyed by Israeli shelling’ in its carpet bombing spree in 2014. The sepia tone of the photo is from a sandstorm enveloping the entire region–which must, like winter & inclement weather, make sleeping outside & life in general a living hell.

Israel has conducted three bombing military operations against Gaza–December 2008, November 2012, & the summer of 2014. Today, 500,000 out of a population of 1.8 million people in Gaza are displaced. Israeli bombing just in 2014 took out 20,000 homes, 148 schools, 15 hospitals, & 45 health care clinics. Bombing partially or completely destroyed 247 factories, 300 commercial centers, & did serious damage (again) to the only power plant. As a result power outages last 12 to 16 hours a day, 95 percent of the water is undrinkable, & sewage disposal has become a health catastrophe. Nearly three-quarters of households are completely dependent on the UN for food because bombing devastated the agricultural sector & because unemployment is at 44 percent.

There is no reconstruction or recovery because the Israeli blockade is making damn sure there cannot be. People who hammer on about Hamas or leftists who snivel about how BDS will adversely affect Israeli workers have no sense of proportion or reality—or decency. What part of ethnic cleansing don’t they understand?

Israel is on a mission to destroy Gaza without mercy. Our responsibility is to stand with them by building the economic & cultural boycott through rallies, forums, teach-ins, speak-outs. We can judge the historic & political importance of the Palestinian struggle by the military, diplomatic, economic, & propaganda war against them. Billions–by now trillions–of dollars have been invested in their defeat. If their struggle, aided by international solidarity, is triumphant it would unleash the forces of democracy against colonialism & tyrannies of every kind around the world & herald the dawn of a new day. Their struggle is that important.