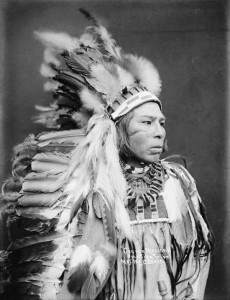 The late 19th century & early 20th century was the era when anthropology–a fundamentally racist “science”–was developed because it was the era when it was thought indigenous peoples had decisively been vanquished throughout the Americas. The ruling elites developed natural history museums to record the extinctions of millions of people & exonerate the barbarism involved in wars of extinction by glorifying “Indians” as the “noble savage.”

White supremacy & colonialism have peculiar social & psychological ways of dealing with the enormity of the violence perpetrated. In his book “Playing Indian,” Phillip Deloria describes the role playing involved from the Boston Tea Party where participants dressed as Indians, to Boy Scout & other group rituals, to cowboy & Indian movies, to sports teams with Indian insignia. ‘Playing Indian’ permeates society till today because the issue of genocide is historically denied & has never been dealt with politically or socially because it continues. And it continues not just in the US but from Alaska to the southern tip of Latin America with multinational enterprises expropriating indigenous lands for agribusiness, mining, oil drilling.

After the wars of extermination in the post-Civil War era–led by former Union generals commissioned by President Abraham Lincoln–Native Americans who survived were driven on to reservations where they lived defeated in squalor & poverty. It was at this time the ruling elite, including J.P. Morgan, commissioned photographers to record the Indian way of life for anthropological purposes. They believed Indians were going extinct & wanted to document them. They certainly weren’t paying photographers to record the realities of reservation life.

The photos which are stunning portraits are more often staged & inauthentic to the attire & certainly to the lives of the subjects. They are glorified, romanticized images of the “noble savage” & fundamentally white supremacist in intent.

An adjacent point about anthropology museums is their distinction from museums of fine art. The latter are considered the venue of the highest achievements of human artistic creativity; natural history museums are considered the repository for primitive ‘artifacts.’ You don’t get more repugnant & supremacist than that.

It was the Civil Rights Movement of the 1960s that changed the study of US history due to the development of Black & Native American studies. Along with ‘playing Indian’ rituals, historic deceits are the nature of colonialism. To today, school text books do not include the study of genocide against Native Americans nor the study of slavery from a non-supremacist point of view. But the Americas will not heal from this continuing catastrophe until it corrects the historic record. That’s why the present role of Native Americans against environmental plunder from the North to the South Poles is so important. They have re-entered history rather than pass serenely to extinction.