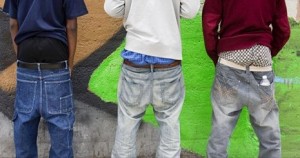 Do you think it’s possible the Taliban really has infiltrated the US as the right-wing claims? The Dadeville City Council in the southern state now known as Talibama passed an ordinance last month banning saggy pants in public. Councilman Frank Goodman said “I prayed about this; I know that God would not go around with pants down.” Who knew God wore clothes?

Maybe if they build the same kind of nail salon in downtown Dadeville as they built in downtown Kabul we can still save the state of Talibama. But do we want to?

Beam me up Scotty!