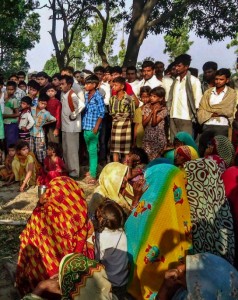 We are inundated this week with news of grotesque crimes against women: from the shooting spree in California to the stoning death of a woman in Pakistan to the gang rape & lynching of two young Dalit girls in India. It isn’t that the crimes are unusual or even more barbaric than women are subjected to every day in every culture with a ferocity hard to squarely face. Fear of violence is something women wear like a second skin, or more like an armor shield.

We bow our heads in respect to all the victims of these crimes. But the unspeakable crimes against the two Dalit teenagers is something we need look at more closely because it involves the complexities of poverty & class, casteism & ethnic hatred, & misogyny.

The 14 & 15-year-old cousins were attacked when they left their home to go to the toilet in a nearby orchard because there was no toilet in their house. It’s common for girls from the Dalit (formerly untouchable caste) community to be targeted as they go about their lives by higher-caste Hindus attempting to exercise supremacy & enforce it through violence.

Australian professor Davleena Ghosh, asked to comment on this crime, says law enforcement is part of the problem: “The usual sort of joke amongst women in India is that if you get raped, you don’t go to the police station because you’ll just get raped again.” That would be a sardonic understatement since the victims’ families accused the police of shielding the attackers & refusing to take action when the girls were first reported missing. It was only after villagers took the young girls’ bodies & blocked a nearby highway in protest that anything was done. Of the five men involved in the crime, three have been arrested, including two cops.

Ghosh goes on to say: “Women’s whole status as a carrier of honour & shame within south Asian cultures is one of the major reasons why often women are assaulted; not just for the sake of the sexual violence but also because they represent a way of revenge for other reasons.” Sociologists can make things so unnecessarily complicated. Whatever unique features south Asian cultures give to misogyny, the two girls were brutalized because they were poor, female, & Dalits & that combination has been played out by supremacists around the world. It is hardly unique to south Asia. Black, Latino, & Native American women in the US well know how violent the combination of class, gender, & ethnicity can be.

Academic feminists & sociologists refer to the place where class meets gender & ethnicity as “intersectionality”. A preferable term is “dialectics” because the meeting place is so fraught with tension, conflict, & violence.

It’s also quite the vogue these days to snort contemptuously at “identity politics”. There are plenty of know-nothings repeating this crap drawn from long-winded, inscrutable texts overladen with Marxist jargon trying to prove identity politics are “bourgeois politics.” People like Zizek & Arundhati Roy have also weighed in on this in a regrettable way.

But the murder of these two young girls makes chopped liver of all the nonsense: they were brutally raped & hung from a tree like sacks of garbage only because they were female, Dalit, & poor. Their identity was the heart of the crime & what enflamed the hatred of the upper-caste perpetrators. If you won’t stand your ground & defend the dignity of female Dalits as such but instead stand by with a bunch of mealy-mouthed quotes from Zizek & others opposing “identity politics” you don’t understand one damn thing about the dialectics of oppression.

In respect to the young girls & their families, many Dalit activists have objected to showing photos of the lynchings. The images are quite horrific & resonate with the archives of Jim Crow-era in the US south where thousands of young Black women & men were hung from trees in mob violence.

This photo from AP has been cropped to exclude the body of one of the young girls hanging from the tree. The public hanging of their bodies was the final expression of supremacy & we should not indulge it but rather respect the memories of the young girls & the grief of their families.

Hopefully this horrific crime will spur all of us to study more fully the plight of the oppressed castes in India & elsewhere.

May our young sisters RIP.