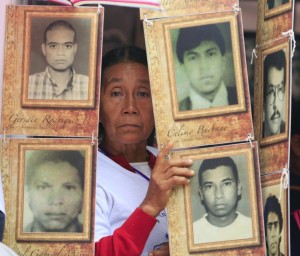 Every year on the last week of May for more than 30 years, families of the disappeared & human rights activists around the world commemorate the International Week of the Disappeared. This is not one of those UN-sponsored days but emerged in international solidarity with the Latin American Federation of Associations of Relatives of Disappeared-Detainees (FEDEFAM).

Disappearing political dissidents is thought to be a problem primarily in Latin America but according to a UN agency forced disappearance is a grim reality & major human rights concern in 83 countries, including the US. Governments use military, paramilitary, & police agents to abduct, illegally detain, interrogate, often torture, & murder political dissidents, trade unionists, students, journalists, or often those just in the wrong place at the wrong time. Because the crime is surreptitious & the bodies disposed of by dumping in unmarked mass graves, there is no evidence of these heinous crimes. They are committed with impunity & seldom face tribunal.

Injustice & mass murder have a long memory & once again victims come back to haunt us in photographic montages displayed in almost every one of those 83 countries. This woman is standing with portraits of the disappeared in Bogota, Colombia (on May 27th).

It does not overstate it to say the disappeared died trying to make this world a better place. We honor them by pledging to continue their work. May they RIP.