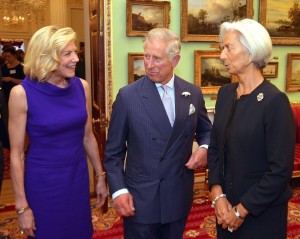 250 international titans of finance & business met in London this week under the aegis of the Henry Jackson Society (a British neoconservative think tank) for a Conference on Inclusive Capitalism. The conference, organized by Lynn Forester de Rothschild, lends itself readily to sarcasm but a sober analysis is more apropos. This was not a gathering of minions & schnooks from the junior executive suites or back offices. These were the big guns of capitalism, key players from financial journals; top analysts from capitalist think tanks; CEOS of corporations like Dow, Unilever, GlaxoSmithKline, Honeywell; representatives of Chinese & African capitalism; academics from schools of business & management like Lawrence Summers; government figures like Bill Clinton; bankers like the head of the Bank of England; Christine Lagarde from the IMF; Betty Windsor’s kid, Charles, representing the British moochocracy; the usual line-up of foundations like the Ford & Rockefeller funds; & Michael Sommer, a German trade union official now head of the International Trade Union Confederation (ITUC). (We’ll dispense with Mr. Sommer in just a moment.) Between them, the attendees control some $30 trillion, about a third of the world’s investable assets.

The malodorous spirit of Milton Friedman hung over the conference & there was even a special panel in his honor entitled “The social responsibility of business is to increase its profits” because he insisted corporate executives should act solely to maximize profits & not promote “desirable social ends.” If maximal profits conflict with human rights, entail grand theft, & involve assassination, torture, & war, well that is just the price of doing business. The mantra of capitalism recapitulates that of the mafia from the Godfather: “It’s not personal, it’s just business.”

Lynn Rothschild has a long history in US politics as a fundraiser for both the Clintons & John McCain. Recognizing that the two parties both serve US capital, she works both sides of the street. She also served as a functionary in the Clinton regime. After burning hundreds of investors in a European telecommunications scam, she married into the Rothschild banking family & now manages an investment company for exporting agricultural produce from India. One of her most telling & least endearing quotes is: “…in my family, the world is divided into show horses, racehorses, & horse’s asses. I was told I’m a racehorse.” She’s also probably a felon but in her class she’s just doing her amoral part to maximize profit.

Rothschild & Lagarde laid it out quite clearly at the conference: what concerns them is inequality. But neither woman is given to sentimentality. What bothers them is not that millions of children are starving to death but that people are beginning to blame it on capitalism & that will affect their rate of profits. Rothschild lays it out: “It’s true that the business of business is not to solve society’s problems. But it is really dangerous for business when business is viewed as one of society’s problems. And that is where we are today.” So you see!? The architects of massive inequality believe they have no social responsibilities whatsoever. Well that’s good they’ve cleared that up. They pronounce their amorality in banners. That’s enough ammunition to discredit any system no matter how intrenched it seems.

Many of the conference participants play a pivotal role in modern capitalism; they circuit the globe advising governments how to handle the massive crises of capitalism. They don’t know how their system works & they don’t know how to fix it. So they temporize & improvise & all conclude with the same austerity programs for working people: cut backs in pensions, education, healthcare, social services, because maximizing profits is the sacred cow.

Forbes journal took the conference quite seriously with a series of homiletics & philosophical musings about freedom & the sacredness of free markets. Their banality can be explained since thought doesn’t come as easily as greed. They’re trying to develop a philosophy for capitalists when the ching ching of the cash register is usually sufficient inspiration. In the past a combination of metaphysics (“greed is human nature”) & brute force was enough to defend the system. Today they patch together a medley from Ayn Rand, the Marquis de Sade, Nietzsche, Homi Bhabha, & the Joker (the Agent of Chaos) to represent the ideals of capitalism. When it’s all unraveled, it just means “greed is good, greed is god.”

Marxist & liberal economists apparently also struggle with how capitalism works & wrestle theoretically with pro-capitalists over rates of profit & fictitious capital. A more useful approach might be to examine where the ruptures are emerging in capitalism & begin theoretics from there. We’re thinking of massive land grabs, mining, agribusiness, the environment, child labor, immigration, homelessness, political repression. It seems so much more useful than facing off with Thomas Picketty over rates of profit since his conclusion of fixing capitalism by taxing the rich couldn’t be more conservative. Or more impotent.

What concerned conference participants was not that a leading dictionary publisher in the US chose “capitalism” as its 2012 word of the year because it was the most searched for word. It is that there are millions of people in the streets protesting the depredations of neoliberalism, the barbaric phase of capitalism. The big wheels see revolutions coming at them & know they won’t be able to outfox them forever. The conference was only a public step in their concerted efforts to maintain the amoral, predatory system that sees the lives of working people as mere chattel, whose philosophy for working people is existential nihilism: our lives are insignificant & intrinsically without meaning or value but they still want us to believe in their system.

(As for Mr. Sommer & the ITUC, although it claims to represent thousands of trade unions & millions of union members, in fact it is an agency that uses union dues money supplemented by support from nefarious sources to thwart working people around the world. It’s a front group of no value to working people.)