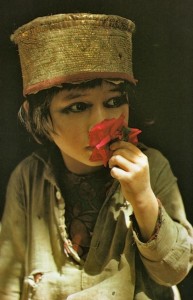 This 1974 photo is of a child in Hunza country, Pakistan, from “La route de Samarkand” by photographers Roland & Sabrina Michaud. Roland (who is French) & Sabrina (Moroccan) are now in their 70s & 80s & still active photographers. For many years they traveled throughout the Middle East taking photos, including many character studies as magnificent as this one entitled “Fillette à la rose.” Although they were surely of the era, it’s not certain their intention was Orientalist, that is, with a colonial attitude toward their subjects.

Thousands of photos were taken of Native Americans at the turn of 19th to 20th century (at the end of the wars of Indian extermination in the US West) which were commissioned by the ruling elite to document a dying people for anthropological purposes. The photos of Native Americans are stunning but glorified images because at the time most tribes had been either exterminated or driven on to reservations living in squalid conditions.

One hates to question the motives of such a beautiful photo of a child. We didn’t invent the past but merely want to understand it. Since we don’t know, we can simply savor this remarkable image of a child now likely in her 50s.