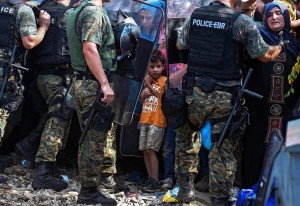 Frontex at the Greek-Macedonia border: Frontex is the thug squad of European Union immigration policy–the same thug squad allowing thousands of immigrants to drown in the Mediterranean Sea.

Macedonian police are blocking refugees trying to cross what the Guardian-UK calls “an illegal crossing point on the border.” Another case of the devil being in the details. As part of a joint operation agreement with the EU & Frontex, Macedonian riot police & military are throwing up razor-wire fencing & using tear gas & grenades against unarmed refugees. The entire border is now an “illegal crossing point.”

This photo speaks for itself & condemns EU immigration policy for the barbarism it is. Imagine that Frontex at the behest of European politicians allows human beings to drown & denies sanctuary to thousands fleeing war & bombing! That’s the barbarism of neoliberalism, the barbaric phase of capitalism.