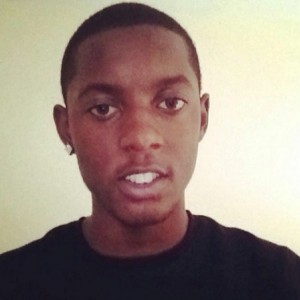 Autopsy results on Mansur Ball-Bey–the 18-year-old shot dead by police last Wednesday in Ferguson, Missouri–contradict the version of events told by police. Police authorities claimed he pointed a gun at them as he fled a home they were serving with a search warrant. They say he dropped his weapon & took off running after officers fired four shots at him–one of those shots fatal.

The autopsy by the chief medical examiner shows Ball-Bey died from a single bullet shot in the back which hit his heart & would have killed him instantly, making it impossible for him to keep running.
There’s no way Police Chief Sam Dotson can finesse this crime but that didn’t stop him from trying. He said the location of the fatal shot doesn’t prove or disprove the police narrative–“Just because he was shot in the back doesn’t mean he was running away.” We’ll let that idiocy stand without comment.

According to the young man’s family–who don’t believe the police account–he wasn’t a troublemaker or delinquent. He had gone over to a relative’s house after his regular job at FedEx & was still wearing his work uniform. He graduated in June from high school, worked part-time, was active in the Moorish Temple, & was planning on going to college this fall.

Our deepest condolences to the family. May he Rest in Peace.