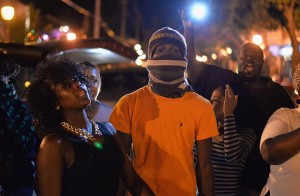 According to police authorities, on Wednesday morning Ferguson, Missouri police executed a search warrant on a house for what appears to be a routine drug bust. They claim two armed young men took off out the back door & when police in the alley ordered them to drop their guns, one of them opened fire. Police shot one “suspect” dead & the other took off. Eighteen-year-old Mansur Ball-Bey was shot four times. Since the other “suspect” is a witness to what actually happened, he better keep running.

Since Missouri has an open carry law which they proclaim “inalienable” & since they allow the Oath Keepers, a white vigilante group from outside Ferguson, to patrol the Black community with AK-47s, it would be necessary for them to explain why they ordered the two young men to drop their guns. If you can carry an open weapon in a coffee shop, why not your own back yard?

There have of course been protests in the Black community against the shooting of Ball-Bey. To justify the shooting, police claim they found four more guns & crack cocaine in the house. Once again, Missouri is an open carry state so those guns are not illegal. To cover their asses, police claimed the guns were stolen. Yeah sure. And since when is summary execution a legal way of addressing drug possession?

Media reports that ‘some protesters express doubt over the police account of Ball-Bey pointing a gun’. All of them do or they wouldn’t be out there protesting while police are moving in armored vehicles, & responding with tear gas & grenades.

Media also reports ‘the city has been on edge’ since a white police officer shot & killed 18-year-old Michael Brown on Aug. 9, 2014. The Black community is “on edge” because their civil liberties are being massively & systematically denied–& that was confirmed in a report by the US Department of Justice.

These protesters were out last night chanting during a march surrounded by riot cops. Our fullest solidarity with them because ‪#‎BlackLivesMatter‬. And because the Bill of Rights in the Black community matters.

(Photo by Michael B. Thomas/Getty Images)