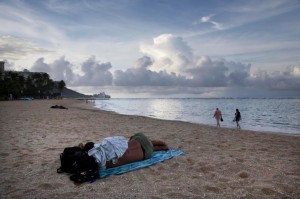 The colonial history of the US in Hawaii is not evident in tourist brochures but changing the status of the archipelago from a territory to a US state in 1959 did not alter its character as a US colonial settler state. Quite justly, many Native Hawaiians consider it illegally occupied & they stand on solid ground in international law.

The first European contact with Hawaii was in 1778 by Capt. James Cook, a British navy explorer. At the time of his arrival, the population is estimated between 250,000 & 800,000. Over the course of the next century, sailors, traders, missionaries, & freebooters nearly wiped out the entire population with infectious diseases they introduced including syphilis, smallpox, influenza, measles, tuberculosis. By the time the US invaded & took over Hawaii in 1893, the native population was down to 40,000 people. Shades of Christopher Columbus!

Today only 10 percent of Hawaii’s 1.4 million residents are Native Hawaiians. Thousands unable to afford living in their own homeland have been forced into diaspora–with many congregated in California, Las Vegas, & elsewhere on the US mainland.

While Hawaii records record numbers of well-heeled white people moving there, it also now has the highest rate of homelessness of all US states with an estimated 8,000 people sleeping rough every night. Forty-percent of the homeless are working people who cannot afford the sky-high rents when the average two-bedroom apartment is $1,800 a month.

Hawaii needs at least 27,000 affordable public housing units by 2020 but state officials only set aside money for 800 units this year & are planning to use shipping containers to house the homeless–like they were crates of tomatoes rather than human beings.

At least 20 Hawaiian cities have made it illegal to feed homeless people in public, have banned camping, sleeping in cars, begging & loitering in public spaces, & are dismantling homeless encampments. In other words they are criminalizing poverty & homelessness rather than addressing the problem.

This is a photo of the famed Waikiki Beach in Honolulu on the island of O’ahu. A homeless man is sleeping there while two tourists take a morning stroll. In 2014, after tourists complained about too many homeless people near the beach, the city banned loitering on sidewalks.

Housing is a human right. That’s the immediate question. But in the long-run, US colonialism in Hawaii will have to be addressed to the advantage of Native Hawaiians.