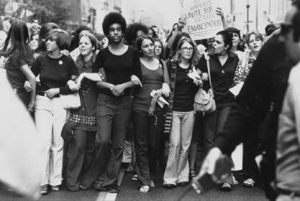 Reposting this from 2014: August 26th, 1970 is a hallmark day in the fight for women’s rights in the US. Feminism in that period was not specific to the US but was an international phenomenon that inspired millions of women around the world. As a social movement, it was never a white middle-class women’s thing as it is so viciously slandered. I was a secretary earning $2.00 an hour, living in a tenement in NYC, & there were many activists just like me.
****
The women’s movement of the 1970s has taken quite a beating by people who draw their history from media & others who want to vilify feminism. Feminism erupted in the late 1960s from every niche of society; women from the Civil Rights Movement, from religious groups, students, working women, Black & Latino women, lesbians. Betty Friedan is attributed with starting the movement with her book “The Feminine Mystique” but many activists had never read her boring book which dealt with white middle class, well-educated women. Feminism was a much broader & deeper social rebellion than her book envisioned.

Feminism & the Vietnam War were my first political awakenings & both began to matter to me when I was a novice in a convent in the early 1960s. My brother was a soldier in the war & I was not allowed to read about it. Here I was a student of history & not allowed to be part of my own times. What rankled me most was the unequal treatment of men & women in the Catholic Church. While we were kept encaged & infantalized, the priests were out gallivanting without the constant supervision we were subjected to. So I made my break & within a year was involved in the antiwar movement.

There was no women’s movement yet so I read Catholic writers who identified with the new ideas of feminism; I’d actually never heard of Betty Friedan. When the women’s movement began to emerge, I headed for New York City to be part of it.

I accidentally came across this audio thingamajig on the internet of me giving a report on the plastering & answering an interviewer: http://www.wnyc.org/story/87675-celebrating-international-womens-day-a-look-at-how-we-got-here/. You can see I was still fumbling my way through an understanding of women’s oppression. I’m not a boastful soul but am very proud of my participation in the women’s movement & met some wonderful women. I continued activism primarily around abortion rights on the campus of NYU where I worked as a secretary.