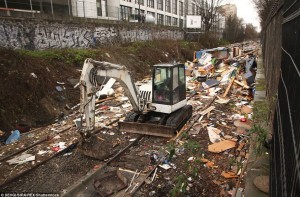 In a dawn raid on Wednesday, Paris police moved in on a Roma shanty town & smashed up 135 wooden shacks where 400 people lived–mostly families with children. The camp was in the 18th arrondissement of Paris, the district of Montmartre, the Sacré Cœur basilica, & Moulin Rouge cabaret. The settlement, built in June 2015 on an abandoned railway line, was called the “Little Paris Jungle” in contrast to the “Jungle” refugee camp in Calais where 6,000 live.

The SNCF, France’s state-owned rail company, is the property landowner. At the end of last year it filed a legal complaint with the Paris High Court which in turn ordered the French Interior Ministry to clear out the shacks, citing concerns about poor hygiene, heating, & fire safety. Those are the reasons they always cite to justify destroying Roma communities. The unspeakable discrimination & persecution of Roma in France, which has gone on for years, entails the entire government & not just the dopes they elect as officials.

Media reports obfuscate the situation of Roma in France. Or maybe they’re too lazy to investigate & instead rely on government press releases & canned news. Roma have lived throughout Europe for over a thousand years. They’re as European as the pasty-faced politicians trying to evict them. Since there’s so much historic social hatred directed at them, many people don’t identify themselves as Roma on census forms. But there are an estimated 400,000 in France alone whose ancestry in Europe goes back centuries.

In the 1990s after the collapse of the USSR, Roma citizens of Romania & Bulgaria began moving to France. It’s estimated (but who really knows?) that 20,000 from both countries now live in France. Since both countries became part of the European Union in 2007, there are no legal impediments to their move because of EU visa-free movement policy. The illegalities are all by the French government evicting them, razing their communities with bulldozers, handing them $300, & deporting them to Romania on chartered planes.

Every year for the past several, France has been bulldozing communities & deporting about 300 Roma a day. Estimates per year are from 10,000 to over 21,000 shipped like cargo back to Romania & Bulgaria. According to some reports, it’s a revolving door where Roma are dumped in those countries but just turn around & move back to France because–though it’s hard to imagine–discrimination against them is even more egregious in those countries than in France & the rest of Europe.

Because France flouts the EU’s visa-free policies, the EU periodically issues tough talk & threatens sanctions, none of which they’ve implemented. But that is of course because the EU is criminally culpable for its treatment of hundreds of thousands of refugees & immigrants from Africa & the Middle East, in violation of international law.

Persecutions like those of the Roma are what lead to pogroms & holocausts–which derive from racism & colonialism. It’s not that EU regimes haven’t learned the lessons of history but that such monstrous predations are built into the very matrix of the capitalist system–especially during neoliberalism, the barbaric phase of capitalism.

Roma are fellow human beings & whether the xenophobes who run Europe like it or not, they have every right to respect & freedom from persecution. And as long as the EU contraption exists, France has every legal obligation to allow Roma to enter & take up residence.