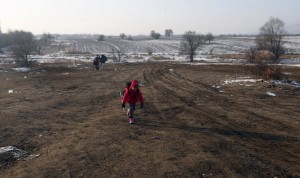 Over a week ago, a local newscast reported, without elaborating, that many undocumented children caught crossing the US-Mexico border here had been sent to homes where they were abused, sexually assaulted, or forced to work as slaves. They did not repeat that report on their website or in either of the other newscasts that day nor in any newscast since. So I phoned & emailed the news director to ask for more info & which government agency had reported that. I have received no response.

In the next couple days, the Guardian-UK & Al Jazeera both reported that according to Europol, Europe’s police agency, in the past two years, more than 10,000 unaccompanied refugee children had disappeared after registering with state authorities when they arrived in Europe. Five-thousand of those children had disappeared in Italy alone & 1,000 in Sweden. Europol officials said they feared many had been kidnapped for criminal purposes, most likely for sex trafficking.

It is entirely possible that some of those children reconnected with family members or that others went on the lam to elude the inhospitable & controlling grip of the EU. But many questions are raised. Exactly what are EU procedures for processing children without caretakers? Do they just fingerprint them, give them papers & send them to the streets in foreign cities where they don’t know the language? What about food & shelter? What about protection? What about child welfare? How exactly did EU officials lose 10,000 children? How exactly did US officials pass children into the hands of exploiters?

This is a catastrophe that highlights the monstrous character of EU & US refugee policies. When it comes to kids, there are no national boundaries or xenophobic policies with a shred of validity. There needs to be a clamor, thorough investigations, & reforming of the policies for handling children that assure their welfare & safety. If a single child has suffered harm from refugee policies–either through neglect or direct collaboration with the traffickers–criminal charges need to be lodged & the perpetrators prosecuted. Neither Europol nor the local TV station can just report this & move on to something else. They have an obligation under international law & every standard of human civilization to find out what happened to those children & to take the necessary actions to make certain children are protected.

This is a refugee child walking alone into Serbia from Macedonia.