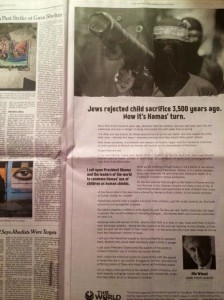 If there’s one guy who has no shame, it’s Eely Weasel–known better by his stage name, Elie Wiesel. He’s made a career grandstanding his sorrow as a holocaust survivor & after he’s spent 50 years in public weeping we’re left to wonder just how deep that font of misery goes. Or can he turn it on & off depending on remuneration?

He’s the oh-so-earnest, self-serving preacher who said: “I swore never to be silent whenever & wherever human beings endure suffering & humiliation. We must always take sides. Neutrality helps the oppressor, never the victim. Silence encourages the tormentor, never the tormented.” Leaving us to question why he never spoke up against Israeli apartheid & ethnic cleansing, why he clammed up & looked ponderous while the world awaited his indictment. Is it possible our man is an utter fraud–& a rather contemptible one at that?

So now the man has spoken in a full-page ad in the NY Times & several other national papers in Chicago, LA, Miami, Washington DC (those cost big bucks & you can be sure he didn’t fork it out of his own account). It’s titled: “Jews rejected child sacrifice 3,500 years ago. Now it’s Hamas’ turn.” Drawing on the Old Testament & the holocaust (the sucker is so predictable), he accuses Hamas of using children as human shields, calls on Obama & other world leaders to denounce Hamas, & urges people to support Israel in their hour of need. You gotta hand it to the guy! He’s a real performer.

We would never demean the suffering of Jews from historic persecution, including pogroms & the holocaust of WWII. We would never accommodate modern libertarian anti-Semitism that is a devil’s brew of illuminati, Free Masons, & the Rothschilds. But don’t ask us to fall for this guy’s schtick which is a manipulation, guilt-baiting, & a source of considerable personal income serving as apologia for Israeli apartheid, ethnic cleansing, & Zionist racism.

Zionist sources rued the ad in the NY Times was placed opposite an article “wrongly condemning Israel for attacks on Gaza’s UN schools.” They also claimed the ad was to “promote universal Jewish values in culture, media & politics.” We don’t know what those values are or how they differ from the values that all humanity honors but we do know you can’t have it both ways. You can’t claim to be high-principled & at the same time refuse to condemn Israel for bombing women, elderly, disabled, children seeking refuge from ethnic cleansing.