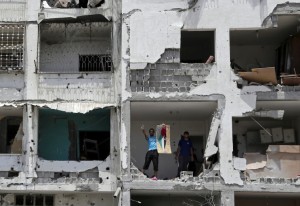 Supporters of Palestine around the world are worn to a frazzle with concern for Gaza because for now four weeks that small but densely populated area has been pounded with hundreds of bombing sorties every day along with bombardment from tank artillery. How could Palestinians possibly recover from such a barbaric & relentless assault!?

Never underestimate the political fortitude of people who have stood alone for 66 years against the most insuperable odds & never bent the knee to colonialism. Here a young Palestinian flashes the victory sign & holds up a map in the colors of the Palestinian flag. He’s standing in the rubble of his family’s apartment taken out by Israeli bombs in Beit Lahiya, an area where Israel simply went berserk probably to put on a good show for those sitting just across the border in their makeshift parlors in the hills of Sderot.

We hope those psychos in Sderot spot this flag with their binoculars. We should tweet it to the four corners of the globe so everyone who stood with Gaza knows: Palestinian intifada lives.

We only hope this young man knows over a million strong & growing raise our fingers in response: solidarity forever until Palestine is free.