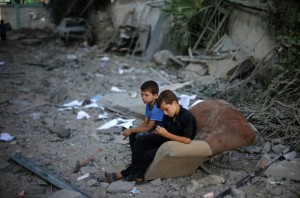 Solidarity can do nothing to alleviate the grief that will haunt & traumatize Gaza for a long time. Mourning loss of such epic scale is not something most of us can even imagine nor something we can salve. What solidarity can do is carry the banner of Palestinian intifada while Gazans take time to grieve & get their bearings.

The mission of solidarity has only just begun but a world movement has formed to hammer at Israeli lies & counterpose the truth of Palestinian’s just claims to live in peace in their own lands. We need rallies, forums, teach-ins, speak-outs, pickets, protests; we need to build the holy hell out of BDS, encouraging everyone to boycott all Israeli products & pressure academics & performers to refuse their gigs in Israel.

No one need longer fear to speak the truth or whisper support for Palestinians lest we provoke charges & be ostracized as anti-Semite. Speaking support for Palestine once seemed a case of the still living attending the Vampire’s Ball or the Invasion of the Body Snatchers. The rosy hue of truth was not just unwelcome but vilified. Kiss that crap goodbye. The truth has been tweeted round the world now millions of times. Uninformed people of good will want to know the truth & won’t accept half-assed explanations or having the dead bony finger of hasbara pointed at them to denounce them as anti-Semites or self-hating Jews.

We need to grab this historic moment & run with it because Palestinian solidarity is no longer voices crying in the wilderness. It is now an international solidarity movement of the kind we haven’t seen since the Vietnam War. History is being remade; justice is being served. The voices of Palestine must now be heard.