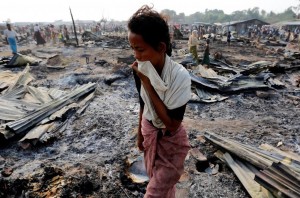 Sometimes a fire is just an unfortunate accident. And sometimes it’s arson with malice aforethought–like the hundreds of slum fires around the world for purposes of gentrification. This fire at one of Myanmar’s eight concentration camps for Rohingya Muslims is likely akin to the latter kind, even though officials are suggesting it was started by an unattended kitchen stove & spread by wind.

At least 440 bamboo huts were destroyed, 2,000 made homeless, 14 people have been reported injured so far & there are unconfirmed fatalities.

Media reports that the concentration camps, which they politely call “internally displaced persons camps” are for Rohingya displaced by “communal violence” in 2012. What the hell is “communal violence”? It’s such a vague, neutral term for genocide by the military junta & rabid Buddhists who go on periodic sprees of arson forcing hundreds of thousands of Rohingya to flee for their lives.

State officials, the very ones sanctioning the concentration camps & ethnic cleansing, assured media that arson victims are being provided with food & housing & that the government is trying to replace the burned out homes as soon as possible. Only the most stupidly gullible would report that as gospel truth.

OCHA, a UN agency, said they would be coordinating humanitarian aid for the victims. Perhaps they should have been raising a hue & cry before the fire against Myanmar forcing Rohingya into concentration camps which they cannot leave.

At this point, no one should ask where Nobel Peace Prize winner & now State Counselor Aung San Suu Kyi is in this disaster. Her political party came to power last month by playing ball with the junta, not by standing up against the genocide of Rohingya. Neoliberal economics are in full force in Myanmar & that land now used for concentration camps may well be wanted for multinational mining or agribusiness enterprises.

This woman who lost her home is surveying the damage at the camp.