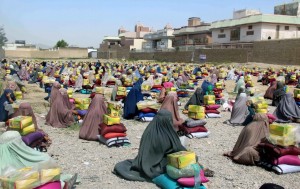 Emancipation, US-style: these women in Kandahar, Afghanistan are receiving aid from a Muslim charity because, according to the caption, “Afghans are experiencing a food crisis despite a good grain harvest last year.”

See what happens when you send in US Marines to liberate women! Fifteen years of US-style emancipation & thousands of families are begging for food. Couldn’t the Pentagon’s salvation army truck in mountains of food from overstuffed supermarkets in the US?

Afghanistan may have had a bumper crop of grains but probably nothing compared to the size & acreage of its poppy crops which US military are busy guarding & CIA transport planes are busy flying out of the country for processing. Who has time for a little matter like food?

The historic imperative remains: rebuild the international antiwar movement. US out of Afghanistan & everywhere else it is!