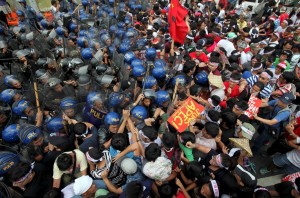 Filipino antiwar protesters never disappoint our expectations. Here they are confronted by riot police as they march to the venue of the Asia-Pacific Economic Cooperation (APEC) summit in Manila.

APEC is an alliance initiated by Australia & the US under the Bush (senior) regime in 1989. It now includes 21 members with a coastline on the Pacific Ocean. That coastline requirement is one of the ways the US & Canada insinuate themselves into the political concerns of southeast Asian countries like Thailand, the Philippines, Vietnam.

If Pacific rim countries concerned themselves with Fukushima contamination of the Pacific, such an alliance would be useful but Fukushima doesn’t appear to have been on any summit agendas. That’s because APEC is really a free trade alliance to strengthen the sweatshop economy. If it was an outright military front with the US, it’s unlikely China would be admitted to membership. The militarization of the region is dealt with by other alliances excluding China.

We have only one question to our Filipino brothers & sisters: what, no effigy of Obama!? Other than that, our deepest respect for leading the world in building antiwar opposition.