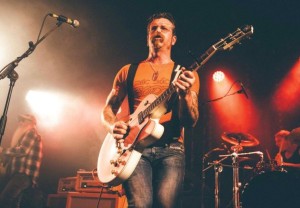 This is the kind of story from whence conspiracy theories evolve–but it’s still a coincidence worth noting. The band playing at the Bataclan theater in Paris when it was attacked last Friday is called Eagles of Death Metal (EODM), a group from Coachella valley in southern California. Frontman Jesse Hughes & the other band members escaped through a backstage door while 89 audience members, including members of the band entourage, were killed.

EODM just released a statement about the attack which is making all the media. It reads in part: “While the band is now home safe, we are horrified & still trying to come to terms with what happened in France….Although bonded in grief with the victims, the fans, the families, the citizens of Paris, & all those affected by terrorism, we are proud to stand together, with our new family, now united by a common goal of love & compassion.

We would like to thank the French police, the FBI, the US & French State Departments, & especially all those at ground zero with us who helped each other as best they could during this unimaginable ordeal, proving once again that love overshadows evil….Vive la musique, vive la liberté, vive la France, & vive EODM.”

So touching, isn’t it? And such a contrast to last July when EODM rejected the direct appeal of musician Roger Waters to honor the Boycott, Divestment, & Sanctions (BDS) movement & refuse to perform in Israel. Lead singer Hughes, a conservative Republican, told the audience at the Tel Aviv club that he “would never boycott a place like this.”

Playing up to Israeli apartheid, Hughes told the audience about his response to Waters. According to one Israeli publication he said, “You know what I wrote back? Two words.” According to another Israeli publication he said, “And you wanna know what I wrote back? Two words: F**k you. Ain’t nobody gonna keep me from my people here in Tel Aviv.” Whatever his actual words, the audience reportedly ate it up. So he continued, saying about Waters: “Never waste your time worrying about what an asshole thinks about you.”

According to an Israeli source (though unconfirmed), EODM will again play Tel Aviv next summer.

So of course we’ll take the sound advice of our man Hughes & ‘not waste our time worrying about what an asshole thinks.’ We’ll proceed without delay to adding EODM to the boycott of Israel. It’ll be no great loss. Their music stinks anyway.

(Photo of Hughes performing in Tel Aviv by Orit Pnini)