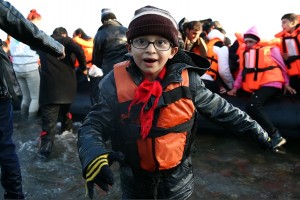 European regimes & US governors demonize refugees to justify the flouting of international law requiring asylum. There are several international agreements mandating asylum for those fleeing persecution & war though most inadequately define who is eligible–giving just enough wiggle room for the regimes to flout the agreements completely.

There’s some derangement involved here because they can’t just leave tens of thousands of people camped on the eastern & southern borders of Europe with no human services & no place to go. Will they declare war on them & start bombing? Start rounding them up in cattle cars for deportation? Let them starve & freeze to death?

This is where the austerity policies imposed on European countries have a head-on collision with European war & neoliberal colonial policies in the Middle East & Africa–a collision & a calamity exposing the utter political bankruptcy of those policies & those regimes. Meanwhile the bankers & oligarchs are making out like bandits.

Meet one of the alleged barbarians at the gate: a little boy coming ashore at the Greek island of Lesbos. We don’t know if he’s with family or one of the thousands of unaccompanied children. A silly question, but do most of them even have passports to drop at the scenes of terrorist attacks? Is the Syrian embassy issuing thousands of passports every day so people can run for their lives?

We wish this little fellow Godspeed on his journey & stand with his right to asylum–not just mandated in international law but a practice held sacred for centuries.