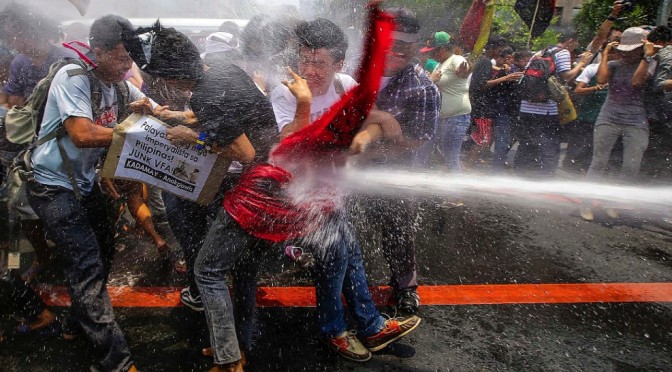 Obama is touring Asian countries this week as part of military negotiations over what US politicians & media call a US “pivot” toward Asia. This so-called pivot is a strategic military shift involving a massive build-up in the region with land troops, air bases, & ship docking facilities. Obama will be visiting Japan, South Korea, Malaysia on this trip but Australia & other countries are also implicated in this pivot to a more bellicose stance in the region. He isn’t scheduled to arrive in Manila, Philippines until next Monday to negotiate an agreement allowing extensive access for US troops, ships, & planes but the Filipino antiwar movement wanted to give him an early bum’s rush.

A rally today at the US embassy in Manila by the Filipino antiwar movement is making headlines as part of several protests against Obama’s visit & against US military presence in their country. Media reports try to downplay the importance of these protests by saying it was only about 100 left-wing activists. That doesn’t explain why riot cops showed up full force with truncheons, shields, & water hoses to back down a mere 100 people–that is, if they count left-wingers as people.

Many in the US claim there is no antiwar movement here. Certainly compared to previous wars, it is a weak & paltry one; that can’t be argued. But that is no reason to sit on our asses, rueing the failure of people to mobilize against the war. There are small actions all over the country by committed activists who stand their ground even if it’s with just a handful of others. Stop the rueing, grab a placard, & join them. Bellyaching doesn’t change the world; action does.

We laud our Filipino counterparts & express our deepest respect & solidarity. And hats off to their wonderful placards demanding no US military presence in their country.