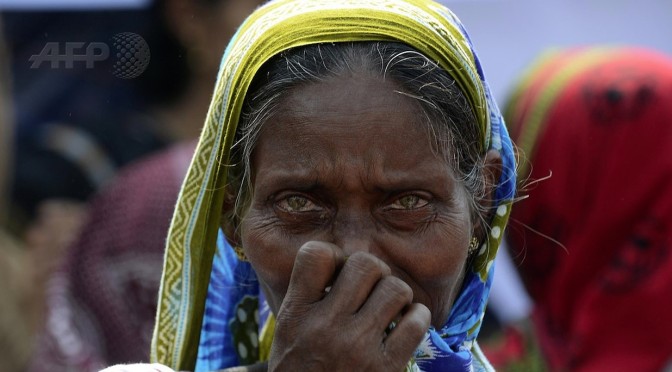 This is the face of sweatshop capitalism. This woman is grieving today on the first anniversary of the Rana Plaza building collapse in Dhaka, Bangladesh which killed 1,138 garment workers & injured 2,515, including dismemberment & permanent disability (though not the severe psychological trauma). The over 300 bodies that could not be identified were simply dumped in mass graves by the government & are no longer even mentioned in crime statistics.

The building collapse, coming amidst a wave of garment factory fires which killed hundreds of workers, set off massive labor protests in Bangladesh. Some of these were attacked by riot cops using rubber bullets.

In many retrospectives on the disaster, commentators eschew political analysis & resort to homiletics saying the factory owners, retailers, & Bangladesh government can’t be held to account because the real culprit is consumer demand for cheap clothing. Such commentators should abandon political journalism & join the ministry; this kind of pathetic analysis does nothing but alibi sweatshop capitalism. There is no moral culpability whatsoever in wanting affordable clothes but there is every culpability in hiring children & young women at chicken-feed wages to work in hazardous conditions to pump out clothes at breakneck speed for retailers raking in estimated annual revenues of between $500 million & $2 trillion.

After an initial PR flurry of retailer concern, all US retailers & most other international brands completely turned their backs on families who had lost family members (often the only breadwinners for extended families), on those now permanently disabled & unable to work, & on those still unable to claim the remains of their deceased family members. Meetings were called, safety agreements were flaunted for the media, promises for compensation were made, human rights groups stood chiding in a chorus. Nothing was done.

At one point, a $40 million compensation fund was announced to aid the hundreds of families now financially adrift. This was proclaimed a landmark in terms of the amount to be paid families & the sophistication of the arrangements. The problem is retailers refuse to contribute to the fund so it still falls far short of $40 million. The figure floated for compensation to each family is $25,000. To make this appear largesse rather than a slap in the face, media reports are quick to point out that per capita income in Bangladesh is $1,900 a year. They omit to mention that for garment workers, per capita income is less than $500 a year. As for those sophisticated arrangements, it means families will be paid in installments “to ensure families will have a steady source of income for years to come.” Are they too stupid to handle their own money? Is $25,000 the value of human life in Bangladesh? Because no matter how you shake that compensation out, it’s all a slap in the face to those who lost their beloved & isn’t enough to pull a single family out of poverty.

To date, one year after the criminal catastrophe, almost no compensation has been paid out, not a single retailer has been charged with a crime, working conditions have not improved for garment workers, & the sweatshop industry is on a media PR blitz to recover its reputation. But sweatshop workers in Bangladesh & Cambodia are leading the campaign against sweatshop manufacturing & we must do everything in our power to render solidarity & support for their campaigns. This grieving woman is among thousands of people affected by the Rana collapse protesting today, some attired in funeral shrouds, at the site of the now-infamous Rana Plaza factory complex.

We offer our deepest sympathies to those who lost their beloved in Rana Plaza & in all the other factory fires & pledge to do our utmost to support them by exposing & putting pressure on retailers. No human life is worth a paltry $25,000 bucks; there is no amount worthy but only achieving justice & the end of sweatshop manufacturing.