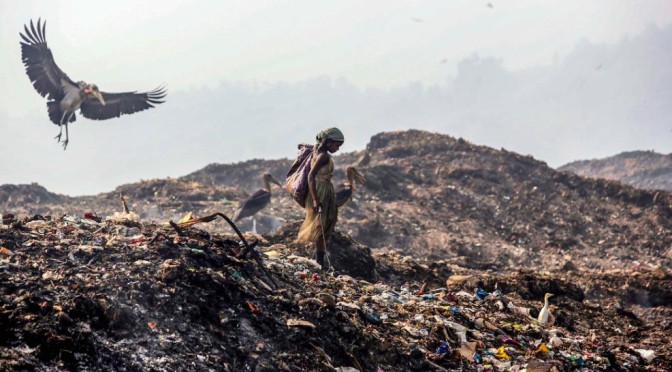 Earth Day 2014 is looking more like Armageddon. This scene in Gauhati, India is repeated in every country around the world where tons & entire mountains of dead animals, decaying food, animal & human poop, rotting unmentionables like diapers & sanitary napkins, & heavens knows what else, is dumped in the vicinity of slums. Not only are residents expected to pick through this crap for recyclables to sell but they are subject to all sorts of respiratory, infectious, & dermatological diseases. It’s called neoliberal waste management. For those who like to call a spade a spade, it’s called barbarism.

The Greater Adjutant Stork flying overhead & competing with the woman scavenging for recyclables was once common all over Asia but is now endangered. Some speculate that’s due to greater sanitation since they favor dead things & excreta. That’s the least likely explanation since they could well be the mascots of neoliberal waste management. Unless we do something quick to rid this planet of plunder, these storks are likely to outlive the human race.