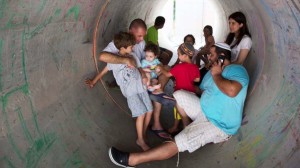 You don’t have to be a classical scholar to recognize a Trojan Horse when you see one. Confidence tricks & scams are the nature of military diplomacy. But when it comes to Israel, 66 years of romanticized Exodus-style propaganda has blunted political perception & nourished stupidity with racism.

The Los Angeles Times has an article today on the latest Trojan Horse, with a headline proclaiming, “Hamas keeps up rocket attacks after Israel agrees to cease-fire”. As of Saturday, Israel was ignoring appeals for a cease fire from the UN security council, Britain, France, Germany, & the US. (They must have made those appeals in a tiny whisper since most of us never heard them.) Now today we read Israel accepted a cease fire proposal by Egypt to suspend all land, sea, & air strikes & sit down with Hamas & mediators in Cairo.

With the German foreign minister at his side (& John Kerry somewhere in the wings grooming himself), Netan-psycho-yahu said Israel accepted the proposal for the purpose of “demilitarizing the Gaza strip of rockets & tunnels by diplomatic ways.” He added, that if Hamas did not accept the proposal “Israel will have every international legitimacy to expand its military operation to restore the necessary calm.” In other words, this peace proposal is just another ruse to justify escalation.

Hamas officials–referred to in the LA Times as “the Hamas militia that controls Gaza”–rejected the proposal, calling it an ambush & complained that everybody in Kingdom Come was consulted about it except the Palestinians. Let’s do a little exegesis here in defense of Hamas’ decision: for months (years?), Egypt has been acting as Israel’s proxy by flooding sewage into the smuggling tunnels on the border, by closing the Rafah border crossings, including in this crisis when thousands of Gazans are fleeing for their lives. The entire country of Egypt is on lockdown, with hundreds being sent to jail for life for exercising democratic rights. Would any political leadership in their right minds trust those guys to negotiate justice for Gaza?

But the most compelling reality is that Israel has one of the mightiest militaries in the world & is conducting land, sea, & air strikes against Gaza. Who knows what the hell Hamas has in rocketry–& it certainly isn’t much because of the blockade–but are they supposed to stand before the onslaught without any attempt at self-defense?

After the fiasco of the last peace talks between Israel & the Palestinian Authority (PA)–when Israel & the US badgered the PA for surrender, escalated settlements, & finished them off with their jackboot operation–does anybody in their right mind think negotiations will settle differences between those being violently dispossessed & the dispossessors? Differences of this scale require intifada.

Many will want to know where Mahmoud Abbas, the leader of the PA, is in all this since he’s been quiet as a mouse–which is good, because when he opens it, it’s to chide Hamas. No need to wonder; he’s where he always is–in the pockets of Israel & the US. When Palestinians finally run him out of there on a rail, he expects remuneration for betrayal rendered in the form of peace prizes & speaking engagements.

An interesting aside is that the LA Times article included 33 photos, mostly of the devastation in Gaza. The few of Israel were of people in shelters escaping sirens & one described as a bomb disposal crew inspecting the damage caused to a house in Israel by a Hamas rocket. In the past hour they added several more photos, including a few others of alleged bomb damage in Israel so they must know that photojournalism belies hasbara.

Befitting the idiocies of hasbara, the article ended with a guy from Sderot, Israel complaining the cease fire was insufficient & residents were “willing to spend a month & more in the bomb shelter for them to finish this rocket fire once & for all.” Nice try, bucko, but the world has seen several photos of residents from Sderot sitting on lawn chairs, eating popcorn & sucking down sodas while watching Israel’s murderous assault of Gaza like it was a football game.

There’s a sardonic element to all this hasbara crap but it’s hard to find the humor when there’s a genocide going on. The mission for Palestinian supporters is clear: continue to build massive public protests demanding “Stop the massacre in Gaza”; support the economic boycott of Israel (barcode beginning 729); support the cultural boycott of Israel; demand “No military aid to Israel!”

Once again, in the interests of journalistic integrity, we post this photo of Israelis in Nitzan, Israel, lolling more than cowering in a drain pipe from what is identified as a Hamas rocket attack but is more likely an Israeli siren assault.