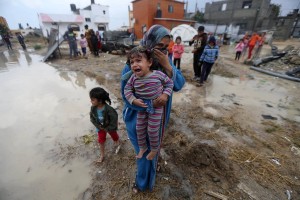 Looks like an apocalypse, doesn’t it? It’s Khan Yunis in Gaza though it doesn’t say if it’s in the town or the refugee camp. This is the beginning of the rainy season in Gaza. Since Israel allows no reconstruction after its murderous carpet bombing binge in 2014, many homes still have no roofs, many people are homeless. This woman & her family were flooded out of their living quarters by this first rain of the season–with more rain, cold, & misery to come. And that isn’t even the worst of it.

Since the power plant has been damaged in successive Israeli bombing sieges, it only operates a few hours a day–insufficient for the sanitation infrastructure–which has created a full-blown sanitation crisis in Gaza. In many places there are open pools of sewage which flow in the streets during rain. Many respiratory & infectious diseases are associated with raw sewage, especially for people stressed to the max & deprived of proper food & health care by Israel’s blockade of Gaza. That’s why the UN says Gaza could become uninhabitable in the next five years.

Nothing damns Israel–& for that matter the US who arms & bankrolls this, the UN who alibis this, the EU & India for sanctioning this, Egypt & Jordan for being part of this–more than the continued bombing & blockade of Gaza. It’s created an emergency situation & makes it imperative we respond with increased efforts to expose this, to build BDS, & to mobilize to demand no aid of any kind to apartheid Israel.

Our fullest solidarity with the people of Gaza.