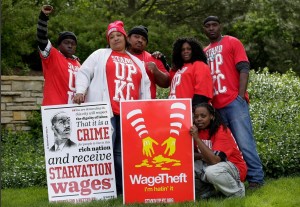 Fast-food joints are not much more than sweatshops. In terms of puny little wages, lack of benefits, & rights on the job, they’re indistinguishable. Workers are most often treated like serfs. In some places they’re expected to come in on time off for meetings without pay; they’re often promised raises & promotions that never materialize.

It’s no coincidence that most employees are young or senior, female, Black, brown, & immigrant. It is a thunderous rebuke to the US labor movement (now divided into two federations) that it didn’t long-ago organize these workers. But it’s just so damn busy sucking up to politicians & in internecine turf wars.

This is a group of fast-food workers from Popeyes Louisiana Kitchen in Kansas City, Missouri: from left, Francie Marion, Sophia Steele, Marcus Washington, Marie Fry, Ronny Reed, & Robin Rhodes (kneeling). They are protesting (about a month ago) with hundreds of other fast-food workers outside the annual general meeting of McDonald’s in Oak Brook, Illinois. They were demanding an hourly wage increase to $15 across the US.

These young people are the faces of labor rebirth in the US which for decades has been led by pompous barrel-chested blowhards who reduced organized labor from over 30% in 1964 to less than 10% today because they’re unwilling to organize & unable to stand their ground against aggressive management policies.

Our fullest solidarity with these young workers. May they kick ass!