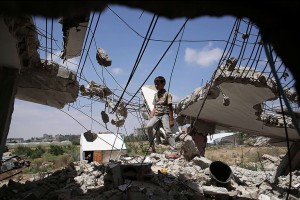 Yesterday marked the 2014 beginning of Israel’s 51-day Operation Ethnic Cleansing (Protective Edge) in Gaza. Social media & photojournalism exposed the truth of Israeli barbarism for all the world to see: schools, mosques, hospitals, refugee centers, entire neighborhoods were bombed to smithereens. There are those, including erstwhile leftists, who shook their heads & said “Why did Hamas make Israel do that?” (Some cement-heads aren’t worth a grimace but we never cease efforts to persuade.)

This little guy is walking in the rubble that still exists in Gaza because Israel maintains the blockade & won’t allow removal of rubble or reconstruction. We can ask what happened to all the millions promised in international reconstruction aid but the Haitians, Afghans, & Iraqis are best able to answer that question: it ain’t happening–even without the machinations between Israel, the Palestinian Authority, & the UN.

Since photographic documentation doesn’t hold much water for cement-heads, maybe the authority of Mego Terzian, the president of Médecins Sans Frontières (Doctors Without Borders), can cause some cracks. MSF operates in Gaza. Dr. Terzian issued a statement in August 2014 at the cessation of Israeli carpet bombing where he didn’t mince words: he said Israel left a “wasteland” behind & he called for ending the genocidal blockade.

Today, he issued another statement denouncing Israel. He said there were over 10,000 wounded Palestinians, including 7,000 women & children. One year later, “the majority of our patients who need surgical care or physical therapy for the wounds of war are under 18 years old.” According to the UN, there are “hundreds of thousands” of Gazans who need medical care & psychological support. But, Dr. Terzian pointed out, 70 health facilities were partially or totally destroyed by Israeli bombing under the guise of taking out Hamas rocket nests. He didn’t mention the ambulances that were also bombed.

MSF denounced “the unacceptable normality of decades of Israeli occupation marked by massacres” both in Gaza & in the West Bank: “The rhetoric of Israel on its right to defend itself is an excuse to always up the bloodiest offensive & a colonial policy that stifles the Palestinians & deprives them of a future.”

Israel got a bunch of generals & law professors (speaking of cement-heads) to testify that they were a model of humanitarian carpet bombing. Shouldn’t the doctors & medical personnel who treated the injured in Gaza carry more weight? Shouldn’t the people of Gaza be allowed to testify?

Build the economic, cultural, & academic boycott of Israel. Let the cement-heads stand with Israel & the US Pentagon.