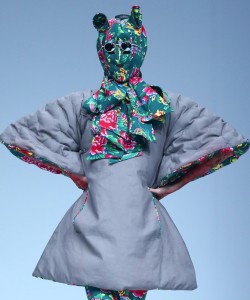 China fashion week is always a festival of creativity where they’ve introduced such things as the rhinestone gas mask which comes in handy for China’s pollution problem. They’re apparently trying to make up for the Mao jacket & the fashion-conscious appreciate that even though it’s irredeemable.

The thing about this creation is it’s unisex character. One wonders why they make such a stink about the niqab when this is considered haute couture. The Mickey Mouse ears remain a mystery. Better not to ask.