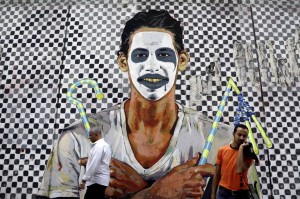 Mural street art flourished & played a dramatic role in the Egyptian uprising of 2011–now so brutally repressed under General Sisi, bankrolled by the IMF & armed by the US Pentagon. The murals were political, irreverent, satirical, iconoclastic, radical–& most of all, magnificent. Under the new regime, the murals could not be allowed to stay & have been mostly painted over by the government. (Murals continue to play a role in Yemen, where the uprising has also been beaten back, at least for now.)

This mural is on a street near Tahrir Square, Cairo, where artists use the whitewashed walls for new art works “with modern & Pharaonic motifs”–whatever the hell that means! Is it an artistic protest akin to samizdat, the dissident, often underground, literature under Stalinism in the USSR which masked social criticism even in detective novels & science fiction? Does that Pharaonic stuff suggest military dictatorship stuff? Or is this just an Egyptian guy evoking ancient history? Or is it an artist being a smart-aleck to keep Sisi’s censors guessing?

The Egyptian uprising against tyranny has been seriously set back–at first outsmarted by the Egyptian military & US Pentagon, but now severely repressed. It was a profound social rupture; a defeat of that scope takes time for people to debate, assess, understand, & come back fighting. But one thing became clear from here: if US working people don’t get off their leaden asses in solidarity to oppose US bankrolling & arming of tyranny, social transformation will take longer & be a whole lot harder to accomplish. Not impossible, just harder.