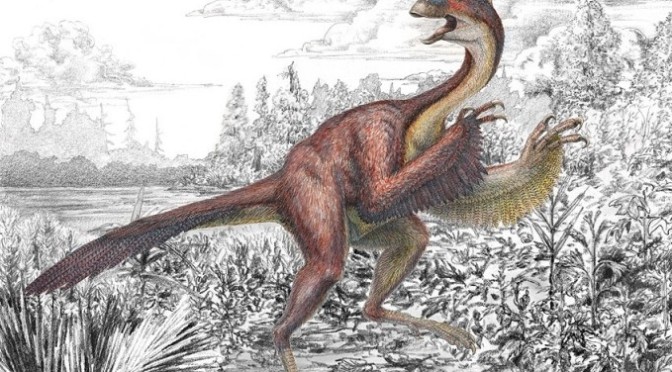 This is an artist’s sketch of Anzu wyliei, a bird-like dinosaur nicknamed “the chicken from hell” that roamed the US area of North & South Dakota, 68 to 66 million years ago. Anzu was over 11 feet (3.5 metres) head to tail & weighed 500 to 660 pounds. A freaky cross between a chicken & a lizard, it looked like it could stomp you to death, rip you to shreds, or simply peck you to death. It had a beak, no teeth, murderous claws, spindly legs, a skinny, long tail, & feathers going every which way. Beauty & intelligence were not its strong points.

It’s not certain why scientists claim Anzu has gone extinct; it’s more likely they just downsized because you can find them all over the US Congress & they’ll be coming out of the woodwork during the next presidential elections. Their brains remain just as teeny weeny as they were 68 million years ago & they’re still pecking us to death. We should all remain wary since we’re not safe until they do indeed go extinct.