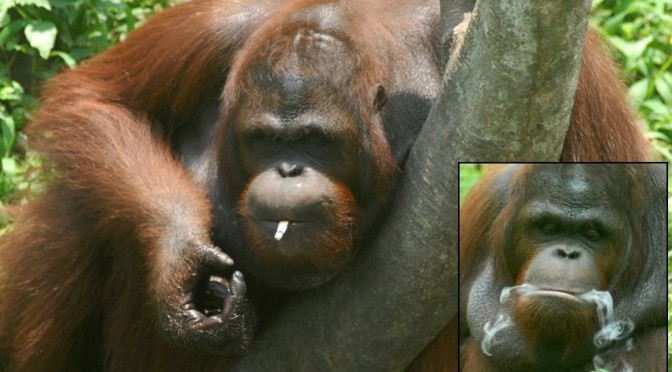 Genome scientists report that orangutans share 97% of their DNA sequence with humans. That doesn’t really mean very much but a misanthrope could say they got all the brains & we got all the power. They’re reportedly quite solitary animals while humans are social creatures–but social creatures who tolerate the most antisocial behaviors.

This is Kirno, a 14-year-old orangutan smoking a cigarette inside his enclosure at Jurug Zoo in Solo, Central Java, Indonesia. Zoo officials claim he smokes dozens a day because visitors ignore warning signs prohibiting throwing food or cigarettes to the apes & throw pre-lit cigarettes at him, laughing while he imitates one of the unhealthiest human habits.

Unfortunately, this isn’t the first time the Jurug zoo has made news for cigarette smoking orangutans. In 2012, they moved a 13-year-old named Tori from a cage to a small island inside the zoo to stop her from smoking. In two years they haven’t figured out how to stop visitors from hurting the animals!? Or is cruelty toward animals the very nature of zoos?

It turns out Kirno was “rescued” by the zoo about four years ago from a knucklehead who kept him caged as a pet. In October of last year (we’re talking not even six months), zoo officials boasted he was freed from cage-living & had a healthy life on the same island as Tori. They claim the island is designed as natural a habitat as possible with trees, bushes, & dens, similar to the rain forests of Borneo. (As if that could fool the orangutans!) Jurug zoo is engaged in breeding orangutans (since they’re being driven extinct by Indonesian palm oil plantations) & hope Kirno can produce offspring.

The problem with this touching narrative is that it’s mostly horse manure & nothing gives that away more clearly than the fact that zoo officials are unable to put a stop to the abuse of the animals by visitors throwing things at them. In 2009, the Centre for Orangutan Protection (COP) in Indonesia conducted a study of five zoos in Java & concluded Jurug zoo was the worst in the physical & mental treatment of orangutans. At that time, they were still kept in cramped, concrete cages which had no roofs to protect them from scorching sun, rain, or wind. They were provided with one small plastic bag of water per day & paper-wrapped plain rice. Orangutans eat leaves, fruits, & insects, not rice. Deprived of all life-purpose, they were not only bored but began to exhibit signs of extreme mental disorder, including repeatedly beating their heads against the wall. Moving them from cement boxes to an island was a step in the right direction but by no means a solution.

These unspeakable cruelties are not just the result of poor managerial systems at Jurug but the very nature of zoos. There is no progressive perspective in zoo management because zoos are nothing but the incarceration of wild animals, turning them into spectacles, & depriving them of all purpose & possibility for happy lives.

We can denounce the knuckleheads throwing cigarettes at orangutans but it’s far more important to denounce zoos as barbaric throwbacks to a time when people believed in the Great Chain of Being. If we want to merit some glory from sharing 97% of orangutan genetics, we ought to do something to put an end to zoos. In the meantime, let’s get it straight: if Jurug officials wanted to protect Kirno & the other orangutans from abuse, they would post guards, they would fine offenders, they would run forums to educate on animal welfare, or they would put the island off-limits to visitors.